In the last Post about migration from Saitek to Logitech FIP drivers, I put a divider right after Step 9 in the article.  It is because the succeeding process mainly is the copying of previous FIP gauges to the new locations. 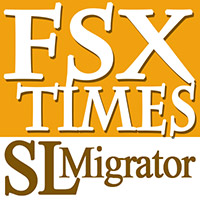 Here’s the new utility SL_Migrator (Saitek-to-Logitech Migrator) I just wrote to help do the job efficiently.   Especially, it will copy and convert the original SaiFlightSimX.xml and SaiFlightFip.xml to the appropriate Logitech version if they are found, so that users can quickly restore the gauges they were running before the migration.

But do note that this utility is written for the gauges I developed and works ONLY after the Logitech drivers are installed.   Also, both the uninstalled (original) Saitek drivers and the new Logitech drivers must be in 64-bit versions.

For the FIP Driver Toggler, it is the enhanced version of the previous Saitek Driver Toggler.    Besides code optimization, it is now compatible with systems running either the Saitek or the Logitech FIP drivers.

Both utilities are now available for download from the Freeware section in my Store.