Last month, I bought a GoFlight GF-TPM because the Saitek TPM I’ve been using for years is too big for the new cockpit I am building. 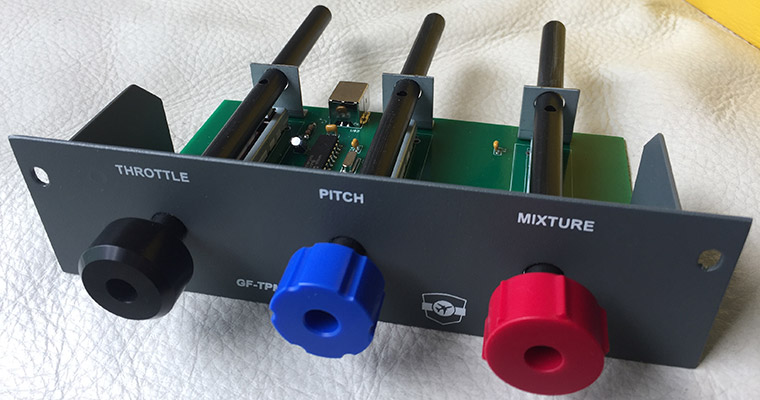 Frankly, the GoFlight TPM wasn’t my preferred choice in the beginning due to its relatively high price ($169) and lack of extra features compared to the Saitek one.

However, there aren’t much choice on the market.  And most importantly, its size does fit nicely to my layout requirements.   So I ordered one.

The following is a review after using it for a few weeks.

Compared to the Saitek TPM that is housed in a heavy plastic enclosure, the “open” design of the GoFlight GF-TPM makes it look shabby.   Fortunately, the unit’s sheet-metal face-plate in grey-color does gains it back some solid feels while holding it on hands.

“Inside” the unit, there aren’t much components on the circuit board.   The most significant one is the controller IC sitting between two of the plastic rods.

Push-pull operations for the throttle, pitch and mixture knobs are made through the three plastic rods attached to the sliding potentiometers directly mounted on the circuit board.

Connection to the computer is a standard USB 2 Type B port in the back of the unit.

And unlike the Saitek version, the GoFlight TPM doesn’t have any extra configurable switches as found on the Saitek TPM.

Adding the GoFlight TPM to the computer is simple.   Just plug it in.   Windows will take a few moments to recognize it as the “TPM”.

However, this doesn’t mean the GoFlight TPM can be used immediately.

It is because the three knobs on the unit were assigned to perform Aileron, Elevator and Rudder operations by default, users must reconfigure them for their intended TPM functions first.

Also, initial calibration is needed to get the TPM up and running properly.

After setting up, the GoFlight GF-TPM can deliver relatively precise push-pull engine controls and adjustments for any single engine aircraft loaded into the flight simulators.   And no noticeable hits to the system is seen.

It is compatible with almost all flight simulators available on the market, including FS9, FSX, FSX-SE, Prepar3D and X-Plane.

From one of the on-line shops I came across during my purchase searching, there’s a description saying that the push-push control axes on the TPM can provide distinctive feels for each engine control just as in the real aircraft — Throttle is smooth, Pitch is Grooved and Mixture is Ridged.

It sounds great.  But I don’t really feel any difference at all.

On the contrary, compared to the Saitek TPM on which the axes controls are a bit too much friction, I find the GoFlight unit is on the opposite a bit too light.   Most of the time I need to pay extra cautions to avoid over/under adjustments by pushing/pulling the TPM axes too hard.

Although the GoFlight TPM doesn’t have any functional errors, I must point out

that the workmanship of it is poor, at least it is true to the unit I received.

To be specific, the passing hole on the metal angle bracket that holds the mixture rod was not drilled and aligned properly.

Together with the sharp edges and debris left around the circular hole, the mixture rod is scratched continuously when moving in and out of the hole.

The most annoying thing is, the scratching causes a great amount of unpleasant squeaking noise.

Similar tooling situation happens on the other two metal angle brackets as well, except that their conditions are less severe.

I ended up unscrewing all the angle brackets from the unit, and rubbed out the sharp edges and debris around the passing holes with some diamond files, so as to make the holes smooth enough for unobstructive operations.

The passing holes were also enlarged a little to minimize unnecessary close contacts with the TPM rods.

In addition, a narrow strip of namecard paper was put underneath the metal angle bracket of the mixture axis.  So the bracket could be lifted up slightly to compensate the misalignment originally spotted on the TPM.

Actually, I had thought about hand-making some new metal or even wooden angle brackets with bigger passing holes to replace the cheesy components — if the polishing works didn’t result satisfactorily in the end.

For the “friction too light” issue on the TPM axes, I retify it by squeezing some plastic packaging foams in between the rods.   This on one hand creates extra friction to enhance adjustment on the controllers, and on the other won’t cause any obstructions to the push-pull operations.

Furthermore, by varying the thickness of foams, it is not difficult to achieve any desirable result we want via trials and errors, even for the one as mentioned above for a smooth throttle, grooved pitch and ridged mixture (even though I don’t exactly know what they really mean.)

Is covering the circuitry by plastic foams in this manner safe?

I tried connecting the TPM in this manner to the computer for half a day.   Neither the controller chip nor the other components get warm at all, not to mention hot.

For safety sake, one might consider lifting the foam up a little to avoid its direct contact with the circuitry.   Or even open up some holes on the foams to allow ventilation.

For sure, as a device created for simulation purposes, one should not expect the GoFlight GF-TPM to be anything like the real thing.

I accept the shortcomings that the appearance and layout of the TPM different from the one on the real aircraft; the travel of the TPM axes are longer; and the knobs couldn’t be twisted for fine adjustments, etc.

But given the price of it, I would expect the GoFlight TPM to have a better product design (for the metal angle brackets for example), or a more careful quality control, at least.

Anyway, in terms of usage and overall performance, I wouldn’t mind to say that I feel more comfortable with the GoFlight TPM than the Saitek TPM in general, especially after the fixes.

Following is the intended location where I am going to put the GoFlight TPM in my new cockpit.   Under it will be a Saitek trim wheel.

By the way, I wonder if anyone noticed that the Saitek TPM is no longer listed on Logitech’s flight simulation product page.   Not sure if the company has removed it from the flight simulation line-up after the Cessna series or not.