This morning I received an email from Paul Wasserman who asked me why the red line on my A2A C172R tachometer is set at 2,400 rpm, rather than 2,700 rpm as shown on his cockpit.   Looking at his photo, 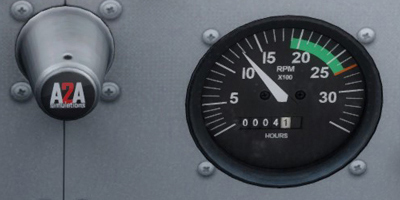 I was bewildered because I had never seen the gauge before; and it was the first time someone reported to me about this inconsistency.

In order to confirm that there were nothing I had missed, I re-downloaded, re-installed and re-updated the aircraft in the following hours.   “Without luck”, the result was the same — the red line is still at 2,400 rpm.   I really had my head scratched.

As we are using different license versions of the C172R, I asked Paul to help seek an answer from A2A, while I started working on a corresponding tachometer for the 2,700 version.

A couple of hours later, Paul sent me the answer from A2A — the rpm red line simply varies according to the type of propeller used.

The 2,400 rpm mark is set for the default propeller, and the 2,700 mark is used with the optional propeller, which equivalent to the 172S, is chosen.

I wasn’t aware of the change at all since I only tested replacing parts in the hanger once or twice very long time ago.    Are you?

Anyway, an update is done for the RPM gauge, which now includes the optional 2,700 rpm versions as well.

As usual, users of the gauge should have received the download link in their mailboxes by now.

Happy flying, and thanks Paul.

Edit: A very well said from a friend: we learn something every day.  I am glad.