Finally, I’ve completed the installation guide for my FIP gauges.   Even though the 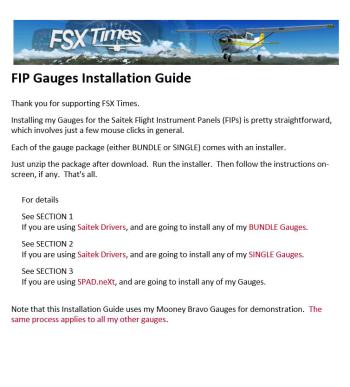 installation process is straightforward, which involves just a few mouse clicks in general, the new guide, with illustrations, should give users a clearer idea how the process goes.

In addition, the installer coming with my gauges has also been updated.  Now it can not only install my gauges for systems using Saitek driver as it always does, but it can also help organize my gauges on systems using SPAD.neXt in a proper manner.

It confuses many users.   I was baffled where to put the gauges, too.

The new installer is thus enhanced to minimize confusions and helps to organize the gauge storage properly.    It is now the standard installer for all my new gauges, and will gradually replace the old version on all existing gauges.

Regarding new gauges, I am quite excited about the generic PFD (Primary Flight

Display) I am working on now.   Here’s a working screenshot of it.

The PFD is based on the Garmin G5 and is by far the most complex gauges I ever developed.

Furthermore, different from my previous gauges, it will incorporate a design to allow some degrees of customization so as to match the different aircraft on which the PFD is used.   Yet, how it should be done has not been finalized.

The first version is expected to be ready by early April.   Pre-sale discount is offered until then from my store.