The Moritz Digital Engine Gauges for the Duke Turbine V2 are now ready,

One known issue — small deviations sometimes appear on the NG %RPM and Prop RPM gauges due to the two gauges using local variables (Lvars), which the Saitek FIP driver doesn’t support.  It’s more prominent when the aircraft is on the ground, and less significant in the air.

Nevertheless, various workaround codings have been implemented to minimize incompatibility derived from the Saitek drivers.

However, although the two RPM gauges are not 100% accurately reflecting the RPM readings, I am still pretty happy about the outcome because there are only some ± RPM points offsetting from the Duke in general under the Saitek drivers.  When the plane is airborne, the difference is getting closer or even none.

Actually, the little difference shouldn’t be a big issue in practice since we won’t be comparing the readings side by side all the time.   And especially we are only flying on a virtual aircraft in a simulated world after all.

For those who demands 100% accuracy, a SPAD.neXt version for the two RPM gauges are also provided.

NOTE AGAIN that since all orders are handled by hand and my time zone might be far from yours, it could take up to 48 hours before download links are sent upon order received.

Lastly, the R22 Robinson gauges are coming in a week or two. Here’re two screen shots. 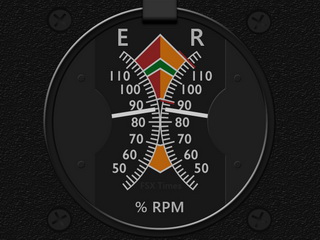